During these times of social distancing and the current lack of competition across the Services, Corps and Units, there is a gap that can be filled by virtual racing. Virtual racing allows individuals to compete against each other in a safe way that conforms with the government’s current social distancing guidelines. The next race in the series will be a Royal British Legion Inter Corps 5K.   The Royal British Legion have been very strong supporters of Army Athletics for a number of years and their sponsorship allows Army Athletics to deliver the variety of events it currently does.

In these times where a number of charities are finding their usual routes to donations more difficult to access, it is only right that we now do our part in trying to advertise the RBL and the great job they do. This race is designed to allow everyone in the Army to take part as a member of your Corps with the Corps who has the highest number of entries receiving an prize that will be presented by the RBL at our annual awards dinner in 2021.   There will be no entry fee for the race but everyone is encouraged to donate to the RBL to show our support (this donation is voluntary and no will be excluded from entering if they do not donate).  To donate either scan the barcode below or text POPPY to the numbers shown below: 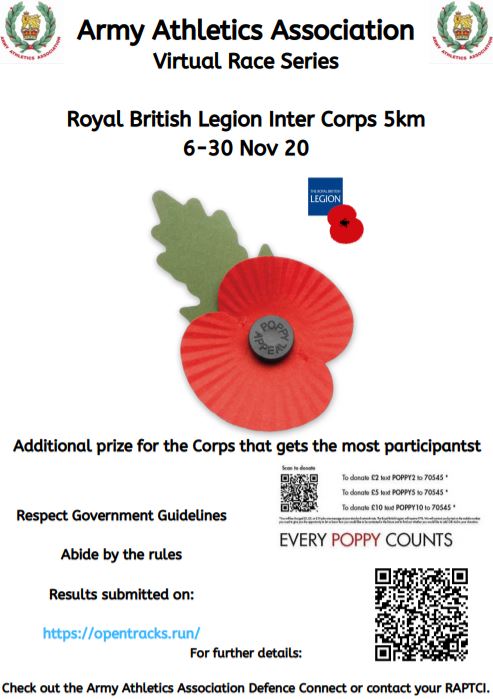