Jon Knighton spoke to the Army Sport Control Board’s Chief of Staff, Colonel Paul Leighton, SO1 Navy Sport, Commander Steve Shaw, Deputy Director of RAF Sport Rich Fogden and Secretary of the UK Armed Forces Sports Board Colonel Bede Grossmith about how sport in the Armed Forces has been effected during the pandemic.

To listen to the full podcast select the speaker icon below:

Whilst sport is still suspended and this year has seen the cancellation of large sporting events such as the Olympics, Lt Col (Retd) Paul Leighton commented on how the Army’s top flight athletes have dealt with the changes:

“the postponement of the Olympics was a big disappointment for our top athletes but they remain motivated and sharp, ready to recommence the selection process.  The Army’s Elite athletes who are currently on the Talented Athlete Scholarship are being offered remote video contact by respective practitioners.  This includes S&C, sports psychology, sport nutrition, Lifestyle support and if necessary physiotherapy.  The Army Elite Athlete Performance Centre operating out of the Combat Centre in Aldershot, provides regular contact to the Army Boxing Team and Troops 2 Target athletes.  The athletes are provided programmes to do at home and involves excellent dialogue between coaches, practitioners and athletes.  So, our top athletes are being looked after as best we can in the current circumstances. There are a number of athletes being supported directly by their National Governing Bodies, such as the two female boxers with GB Boxing, Gnrs Karriss Artingstall and Tori Willets.

They have been provided extensive programmes to work from at home and good feedback on their progress is provided to the Army Elite Sport Programme Manager.  This sort of support is occurring across a range of disciplines, including Snow sport, Bobsleigh and Athletics.”

When asked about when representative sport in the Army can resume, Lt Col (Retd) Paul Leighton reinforced that it is the Army’s decision overall as to when sport can resume within the Service:

“Whilst we take advice from the National Governing Bodies and adhere to current direction on social distancing, it has always been an Army decision on when Army sport will recommence […] In the meantime, over the last couple of weeks we’ve been conducting an estimate of what Army sport might be able to start first based on the current social distancing requirements and National Governing Body advice.  These recommendations will be staffed up to Army HQ within the next couple of weeks either for their endorsement or rejection. The decision will be based on what the Army’s capacity and appetite is to authorise the recommencement of Army representative sport.

SO1 Navy Sport, Commander Steve Shaw had this to say about the recommencement of sport within the Navy after all Navy sport was suspended:

“we’re planning to take advantage of every opportunity that arises as soon as we get a relaxation. So we’ve got a whole host of risk assessments that have gone out as a result of the recent relaxation on the numbers and we push direction and guidance out to our associations to actually get on and exploit the relaxation on the numbers as much as we can. Whilst we cannot carry out sport we can carry out football drills, we’re carrying out rugby drills, we’re carrying out hockey drills and we’re making as much use of grassroots as we possibly can within those numbers.”

“The return will be condition based. But part of those conditions is about the messaging to the people and the wider communities […] I think there’s a powerful argument that we absolutely need to take NGB guidance but then look at it in the wider context and follow the command chain. Absolutely key will be what sport can be done with social distancing in place. The rest of it is a challenge and pleasingly we’ve got people always up for a challenge so we’ll be able to achieve what we can when we can.”

On the overall UKAF level Col Bede Grossmith believes that:

“The UKAF level is completely dependent on the single services being able to establish their grassroots and their own representative teams so there is a natural build up. Hopefully within the winter season we might be able to start generating some of that so by the end of the season we might be able to get some decent representative fixtures. But to put an absolute timeline on that is difficult.”

BFBS also put together a short clip of the podcast that can be watched below: 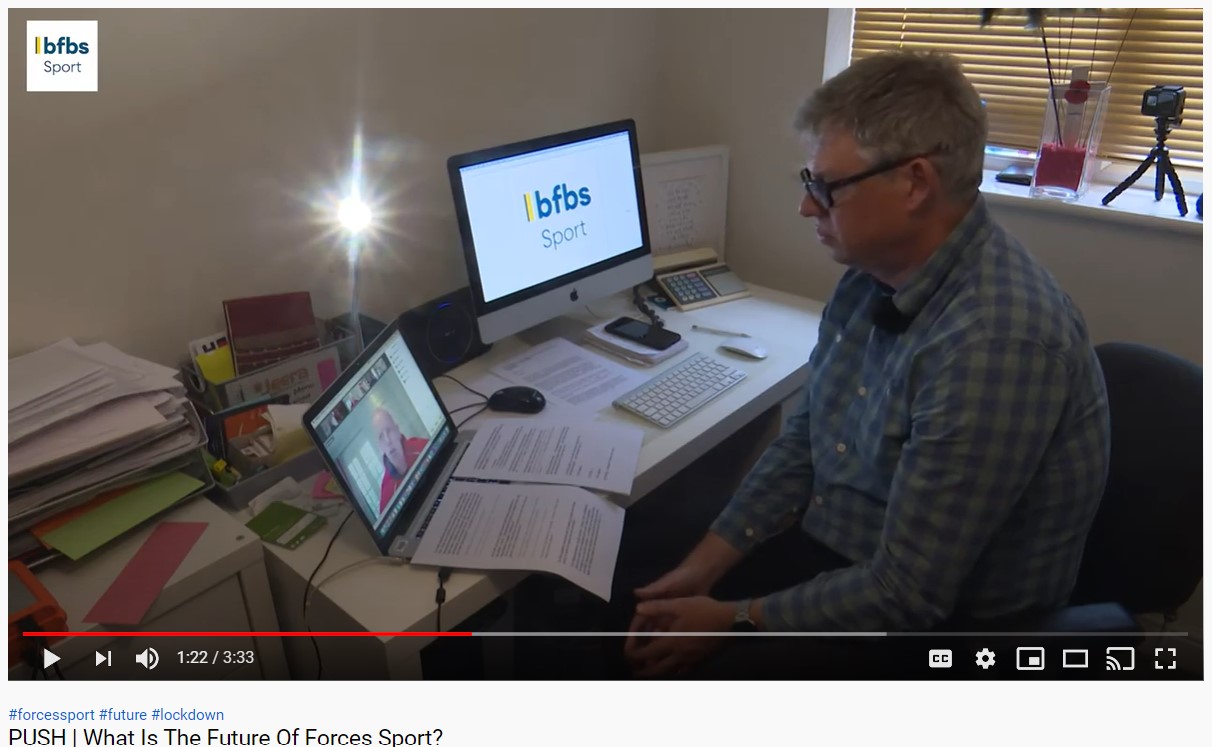